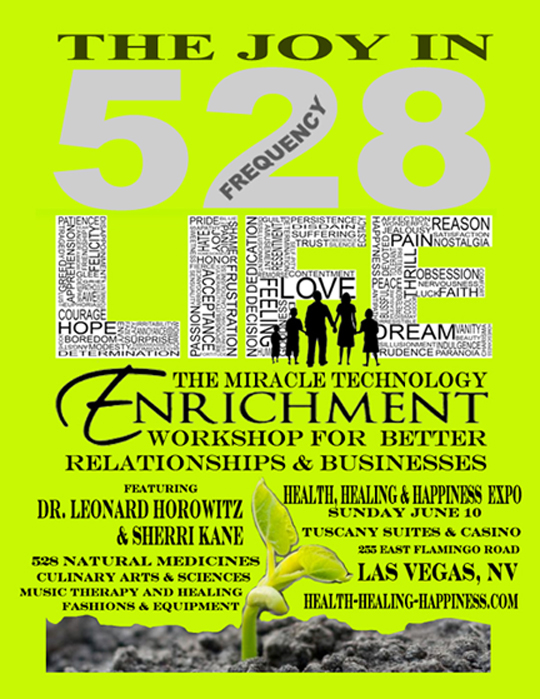 Solutions to the globally-witnessed degeneration of cultures and environments are in “musical mathematics,” says scholar, author, filmmaker, and whistleblower, Dr. Leonard G. Horowitz. Lecturing across Europe, the Harvard-trained public health expert is heralding the “frequency of love” and recommending “ 528 LIFE ” as the only reasonable alternative to unnatural death by petro-chemical poisonings and “Artificial Intelligence (AI)”.

In “ 528 LIFE: The Miracle Technology Frequency Enrichment Workshop for Better Businesses & Relationships, ” the world’s most accomplished whistleblower examines these two competing movements, both hot topics in today’s technology, theology, and entertainment industries. Nature and the Creator’s creative technology, evidence proves, features the “528Hz/nm frequency” of sound and light at the heart of rainbows. Horowitz, and his partner, Sherri Kane, pioneered 528Radio.com to remedy distress. Alternatively, the opposing “AI Death Cult” features the “741Hz frequency” called “Devil’s Tone” in musicology. That sound, commonly broadcast in today music, generates distress and disease. When coupled with environmental pollution and medical intoxications, premature demise is certain.  To solve the problem, the doctor recommends living a ” 528 Life “, and integrating the “sound of love” into relationships, industries and businesses.

The problem, as Dr. Horowitz sees it, largely involves “military neuroscience.” Governments and companies internationally are increasingly relying on frightful media propaganda to conceal crimes and divert from generally neglected, albeit profitable, depopulation activities. The doctor points to Bill Gates as a leading example of a high tech media savvy mogul urging global depopulation in favor of “Deep State” devil-doers.

The high tech world also isolates you more and more from your family, friends, community, and innate spirituality, explains Horowitz. People are increasingly engaging a “technotronic reality” versus real life. Cell phones, iPads and televisions have become intermediaries in relationships. In “technotronic society” you are subjected to “frequency warfare.” And the more distressed and diseased you get, “evil obedient” broadcasters and corporate stockholders are profited, fueling the degenerative ” Death Cult “.

“Artificial Intelligence (‘AI’) and military neuroscience cuts at the core of humanity’s survival against ‘technotronics,’ ‘frequency warfare,’  and ‘information warfare’ best demonstrated by deadly drug ads and ‘fake news’ networks manipulating the mass mind and CULTure that is causing you to question and modify your view of ‘normalcy’ and ‘reality,’” Dr. Horowitz warns.

He points to another tell-tale sign of AI personified by Jim Carey, who the doctor describes as “a Hollywood stooge assigned to advertise the emerging ‘tripped-out’ psychedelic view of ‘reality’ benefiting the multi-national corporate takeover of human consciousness by robotics for a Madison Avenue indoctrinated human race.”

The Solution in 528 Frequency

The “Love 528 Paradigm Shift” is already visible in the music industry, reports the author of The Book of 528: Prosperity Key of LOVE. The “LOVE 528” frequency is increasingly being used in natural medicine and the arts. It is transforming recording artistry and clinical practices faster and more powerfully than any movement in recent history courtesy of experts internationally confirming Horowitz’s discoveries that draw on prophecy and the musical-mathematics of “Divine Design.” Listening to 528Hz music puts people in the “zone” of creative self-expression and Divine communion. Like tuning into a special radio station broadcasting over a special frequency, 528 is the clear channel broadcast at the heart of the cosmic “matrix math” controlling nature and natural evolution.

528Hz frequency has the honorable “triune distinction,” explains Kane. First, 528 is the “‘MI’iracle tone of the original Solfeggio musical scale. Second, 528 plays at the heart of the most spiritually-uplifting church hymn in history–the Hymn to St. John the Baptist. And third, 528Hz is the “key of the House of David,” according to revelations from the Torah and New Testament, Isaiah 22:22 and Rev. 3:6-8.

“What about Maslow’s hierarchy of human needs wherein ‘love and belonging’ among real people is paramount to self-esteem and actualizing personal passions?” Kane asks. “Is it too late to save civilization by heralding the 528 frequency that celebrates the Creator’s miracle-making reality evidenced throughout nature?”

To view Sherri Kane’s introduction to Dr. Horowitz’s Amsterdam presentation, and Part 1 of the doctor’s lecture explaining the origin of the “528LOVERevolution”, CLICK HERE.

Below is a copy of the flier advertising Dr. Horowitz’s keynote presentation at the Letni Festival in Poland, scheduled for August 4, 2018 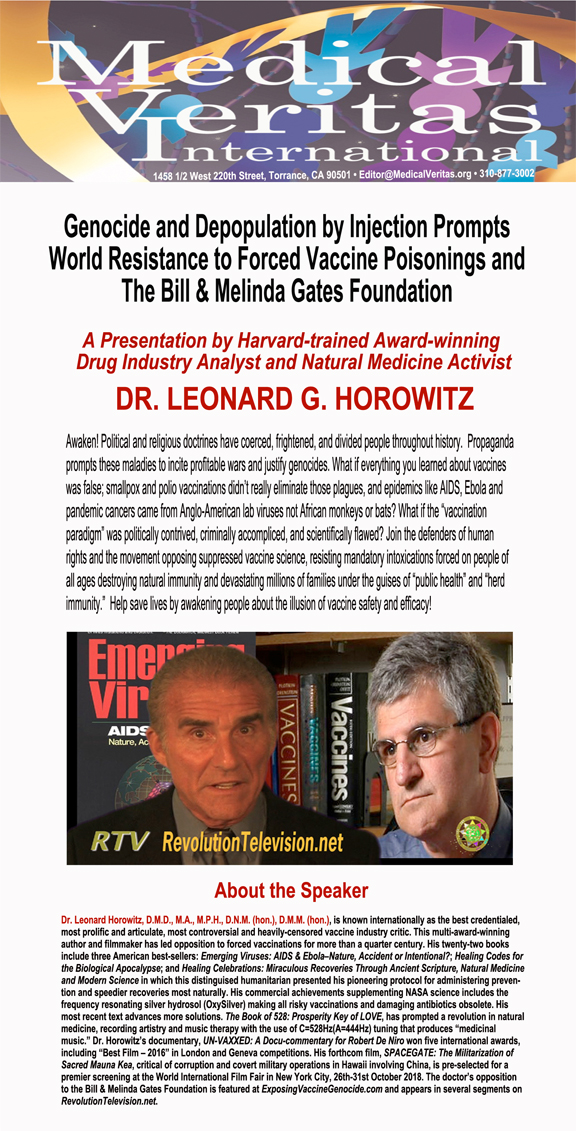 More About the “528 Revolutionaries”

Dr. Horowitz is recognized internationally as the best-credentialed, most prolific, controversial and articulate pharmaceutical industry whistleblower and consumer advocate. Prior to becoming Editor-in-Chief of Medical Veritas online journal, this Harvard and Tufts University trained expert in public health published more than twenty books, including three American bestsellers, dozens of peer-reviewed scientific articles and six feature-length documentaries including: In Lies We Trust: the CIA, Hollywood & Bioterrorism; PharmaWhores: The Showtime Sting of Penn & Teller; and the “Best Film-2016” in London and Geneva (World International Film Festival) competitions titled UN-VAXXED: A Docu-commentary for Robert De Niro. Dr. Horowitz’s 528 Key Movie and The Book of 528: Prosperity Key of LOVE pioneered the concept of using “528 frequency ‘medicinal music’” to improve healthcare and recording artistry. His voluminous Internet presence and popularity has prompted a revolution in the entertainment industry, causing celebrities including Bono and Jay-Z to “tune up” from A=440Hz standard tuning to A=444/C=528Hz in featured albums. The doctor’s works are also evident in a number of Hollywood productions, including Will Smith’s I am Legend, Oprah Winfrey’s A Wrinkle in Time and Christopher Nolan’s Inception movie featuring 528 frequency themes impacting reality and intervening in the competition between good and evil and light versus darkness. Many of the doctor’s lectures and video productions are featured on RevolutionTelevision.net, with frequency intelligence provided on 528Revolution.com. Dr. Horowitz’s celebrity and success as a health educator and natural products entrepreneur has contributed greatly to expanding “consciousness” globally. His therapeutic inventions and 528 frequency applications show Dr. Horowitz and his partner, Sherri Kane, are world leading innovators. Their 528Records.com and the 528Radio.com network remasters and continuously broadcasts a dozen listener-supported genres of music in 528Hz. Dr. Horowitz’s press kit is available for a free download, and sign-ups for his Healthy World Newsletter free subscription is available at HealthyWorldNews.com. (Subscribers are given free advanced viewings of his latest films.) Sherri Kane is an investigative journalist who defected from Fox News in Los Angeles to join Dr. Horowitz’s Healthy World organization. The consummate advocate for women’s, children’s and animal’s rights, Sherri launched the “Conscious Species Channel” on RevolutionTelevision.net, and is the Associate Editor of Medical Veritas online journal. Sherri co-authored numerous articles and several books with Dr. Horowitz, including Space Pearl Harbor, the Las Vegas Deep State Massacre, and their soon to be released, Zion Gold: The Secret Kingdom.