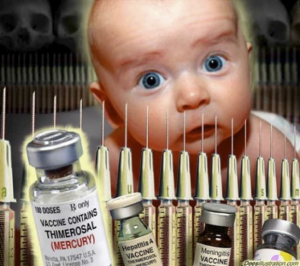 Sandpoint, ID (Feb., 1999)- An extraordinary bipartisan consensus has been reached by two factions that rarely agree on anything. Proponent and anti-vaccine lobby leaders have warned audiences about Dr. Leonard G. Horowitz, a Harvard graduate independent investigator, public health educator, and author of the bestselling book Emerging Viruses: AIDS & Ebola-Nature, Accident or Intentional? According to leaders of both vaccine camps, Dr. Horowitz’s publication and presentations, that detail the political and religious aspects of the vaccine agenda, are harmful to increasing vaccine awareness and debate. According to Dr. Horowitz’s supporters, however, Centers for Disease Control and Prevention (CDC) authorities, and vaccine risk awareness movement leaders, are suffering from the same affliction-“political myopia with bureaucratic dystrophy.”

According to U.S. Department of Health and Human Services directors that convened at a Conference on the Advisory Committee on Immunization Practices (ACIP) on February 18, 1999 in Atlanta, Georgia, Dr. Horowitz, the most invited speaker on the anti-vaccine circuit, raises “themes” that “disease-specific experts at the CDC . . . had difficulty responding to.” Dr. Robert Chen, assigned by the CDC and ACIP to address the nature of the anti-vaccine movement, complained that “public confidence in vaccines” has been challenged largely as a result of Dr. Horowitz’s work along with other “alternative literature.” Public health officials and CDC experts “tend not recognize the broad range of concerns that are raised,” by Horowitz including the socio-political and religious aspects of the vaccine debate. Dr. Horowitz has become internationally known for his stirring reports concerning major pharmaceutical companies and their financial and administrative

links to depopulation activists including, in previous years, Hitler and the Third Reich. Moreover, Dr. Horowitz, a Messianic Jew, routinely relays information from the Old and New Testaments concerning “God’s laws” that condemn the contamination of blood or injection of anything that might cause cancer through genetic mutations as is the case with bacterial and viral vaccines that relay genetic material to human cells. (See Bible excerpts in “Vaccination: The UnGodly Practice” document in FTP file at www.tetrahedron.org).

Vaccine risk awareness proponents, likewise, express concern that Dr. Horowitz’s “conspiracy theories” and religious bent are too “radical” to be supported. Barbara Loe Fisher, Cofounder of the National Vaccine Information Center was among the first to censor Dr. Horowitz’s presentations at a conference which was cosponsored by Dr. Horowitz’s own organization, Tetrahedron, Inc., in 1997. More recently, organizers who planned an “Emerging Viruses and Vaccinations” presentation urged the doctor to delete the spiritual and politically sensitive issues from his usual discussion. One woman from Penticton, Canada, Donna Mulhall, following another presentation, complained over the internet, “I went to the lecture convinced not to vaccinate, but after hearing Dr. H., I had to renew my faith.” Her letter was heavily circulated among vaccine challengers by Gary L. Krasner, Director of New York’s Coalition For Informed Choice, who added his own conspiracy theory that Dr. Horowitz’s “infiltration into our movement was orchestrated by the medical establishment to destroy our credibility.”

“It’s a case of the squeaky wheel getting greased,” defended the doctor’s wife, Jacqueline Lindenbach, chief administrator of Tetrahedron, Inc. “I was there. What Ms. Mulhall and Mr. Krasner failed to report was the resounding standing ovation Len received by at least three-quarters of his Penticton audience. Most people stayed to almost midnight, on a work night, many with infants and children, to hear him finish.”

“The flak only gets heavy when you’re over the target,” advised Colonel Bo Gritz, America’s most decorated war hero, in defense of Dr. Horowitz’s work on vaccines. The Colonel, who hosts a popular radio program on Talk America Radio Network, is familiar with many of the roles played by military intelligence in support of the pharmaceutical industrialists implicated in contemporary genocide in Dr. Horowitz’s book. “So far a Nobel Prize hasn’t been awarded to Dr. Len Horowitz, but it should have been,” Col. Gritz attested. “His book is impeccably researched and his information is vitally important.” In fact, he said, “Dr. Horowitz relays the most provocative and important information in the world today.”

Further concerning the conspiratorial elements discussed by Dr. Horowitz, another national security insider, Col. Jack Kingston, whose vitae includes a 1995 nomination to the Office of the Joint Chiefs of Staff as a Strategic Planner for the Pentagon, concurred with Col. Gritz’s assessment. Currently the Chairman of the National Security Advisory Board in Washington, D.C., Col. Kingston recently advised a Hollywood film producer in writing, “In my estimation he [Dr. Horowitz] has unearthed a covert operation run amok, that is bigger than any secret operation in U.S. history, and more momentous in it’s implications to humanity than the atomic weapons ‘Manhattan Project’ of World War II.”

Dr. Horowitz cautioned, “people who lack the eyes to see the documentation and ears for the truth I relay, or who cannot grasp the facts supporting the likelihood that vaccines are being used as genocidal weapons today need not attend my programs. From now on, in fact, in response to Mr. Krasner’s well circulated allegations, I will invite any such person who mistakenly attends my presentations to leave at the first break. That will free up the space and energy for others who are ready to come to terms with the truth.”

“Most vaccine risk awareness leaders,” Dr. Horowitz concluded, “like their counterparts in public health organizations, suffer from ‘political myopia and bureaucratic dystrophy.’ Their quest for money, power, and political support, limits their grasp and communication of the big picture. As a result, they become dysfunctional and even counterproductive. Thankfully I don’t operate under those constraints.

“The totality of the problem involves what I call ‘bio-spiritual warfare.’ This will become more apparent with the release of my next book, Healing Codes for the Biological Apocalypse (Tetrahedron Press, June, 1999; ISBN: 0-923550-01-1; $26.95). Anyone with any common sense will see that vaccines and vaccine related injuries are symptoms of a greater problem-the escalating battle of all time-spiritual warfare. You’ve got to diagnose this problem in order to effectively treat its symptoms. Those who have the wherewithal to realize this, and take appropriate actions, will be far more likely to survive the loss of approximately half of the world’s present population as predicted and prophesied by public health authorities and religious scholars alike. Those who can’t grasp this knowledge will be at far greater risk for vaccine injuries and premature death.

“Finally,” Dr. Horowitz concluded, “I think it’s fine that many people may not want to hear what I have to say. Since vaccine manufacturers like Merck, Sharp & Dohme are among the leading depopulation funding sources, and their related organizations, like the Merck Fund, currently fund depopulation programs aimed at reducing the world’s population by half as prophesied in the Bible, I encourage my detractors to disregard my message and God’s laws. As our new bumper-sticker advises: ‘GET VACCINATED. The World Needs Fewer Fools!'”