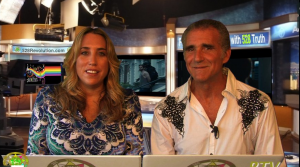 CLOSED CIRCUIT Director, John Crowley and Screen Writer Steven Knight may not know their excellent film depicting “the most high profile murder case in British history,” featuring the covert operations of MI6 and the CIA advancing terrorism for war making and money laundering, is more truth than fiction.

In this movie review, Dr. Leonard G. Horowitz and Sherri Kane—two investigative journalists famous for exposing intelligence industry secrets, especially those kept by the drug cartel directing Hollywood—present a critical analysis of the film pursuant its relevance to geopolitics, economics, and “closed circuit” courts in America and Britain today.

“The HOROKANE,” so named by America’s most wanted neo-Nazi undesirables who were offended by the couple’s journalism, produced a number of films and movie reviews critical of “the system” that seduces people with propaganda. One example is Horowitz’s Accolade Award Winning feature-length docu-comedy PHARMAWHORES: The SHOWTIME STING OF PENN & TELLER—exposing “BULLSHIT” magicians Penn Jillette and Raymond Teller for disappearing respectability in the entertainment industry, while concealing special interests for Big Pharma.

In this movie review you will learn “Closed Circuits” references more than surveillance cameras used by law enforces in the criminal justice system. This film is not a Hollywood PSYOPS designed to sell populations on security systems. The movie accurately presents the concealed double agents and treasonous agencies serving the oligarchy directing the Western World’s most advanced powerful intelligence institutions—MI6 and the CIA.

Watch this movie review by “The HOROKANE” and wake up if you are still asleep or under the influence. Naysayers, neighbors, family, and friends with appreciate this smart alarm as well.

This review raises and answers the important question, “Why would Comcast/NBC/Universal Films, shortly after their $16B acquisition from the Royal Family invested General Electric Company, produce a film depicting official British and U.S. Govt. malfeasance, conducting terrorist attacks, genocide, and blaming Muslim double-agents for everything?”

Suffice it to say, “The HOROKANE” use their talents and equipment to launch an education campaign as world leading peace activists to alert the public concerning the propaganda increasing to launch World War III—vitally important intelligence to achieve honest to goodness “Homeland Security” and “Emergency Preparedness.”