Not Religion/Pure Mathematics: Why Tesla, More than Einstein, Prayed

What Makes a Genius Tick? 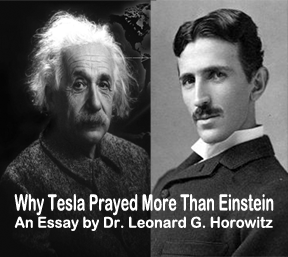 Clearly, according to a growing consensus, last century’s greatest genius was not Einstein. It was Nikola Tesla.

Excerpting from Wikipedia, “Nikola Tesla was an inventor and a mechanical and electrical engineer who died in 1943, and is best known for many revolutionary contributions in the field of electricity and magnetism. Tesla’s patents and theoretical work formed the basis of modern alternating current electric power (AC) systems, including the polyphase power distribution systems and the AC motor, with which he helped usher in the Second Industrial Revolution. Contemporary biographers of Tesla have regarded him as “The Father of Physics”, “The man who invented the twentieth century”[3] and “the patron saint of modern electricity.”[4]

After his demonstration of wireless communication (radio) in 1894 and after being the victor in the “War of Currents“, he was widely respected as one of the greatest electrical engineers who worked in America.[5] Tesla’s fame rivaled that of any other inventor or scientist in history or popular culture,[6] but due to his eccentric personality and his seemingly unbelievable and sometimes bizarre claims about possible scientific and technological developments, Tesla was ultimately ostracized and regarded as a mad scientist.[7][8] Never having put much focus on his finances, Tesla died impoverished at the age of 86.

Tesla advanced wireless power electronics before anyone else. He demonstrated on a small scale (lightbulbs) as early as 1893 that this could be done, and he aspired to use intercontinental transmissions to fuel industries globally.  His nearly finished Wardenclyffe Tower project proves how close he came to fulfilling this dream and scheme to free humanity from energy slavery. 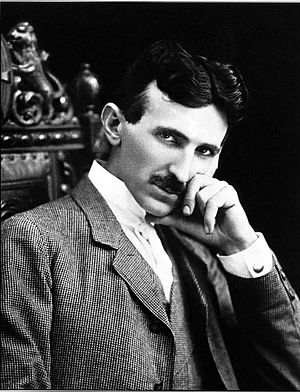 Aside from his work on electromagnetism and electromechanical engineering, Tesla has contributed in varying degrees to the establishment of robotics, remote control, radar and computer science, and to the expansion of ballistics, nuclear physics,[9] and theoretical physics. In 1943, the Supreme Court of the United States credited him as being the inventor of the radio.[10] Many of his achievements have been used, with some controversy, to support various pseudosciences, UFO theories, and early New Age occultism.

Still, here was a man that prayed over every one of his inventions before he turned them on. “My Mother had taught me to seek all truth in the Bible,” he wrote regarding his inventive prowess. “The gift of mental power comes from God, Divine Being, and if we concentrate our minds on that truth, we become in tune with this great power.”

Alternatively, Einstein did not feel God’s presence within him, as much as he observed it in nature, in mathematics, and the laws of physics. To describe his religious orientation, he wrote: 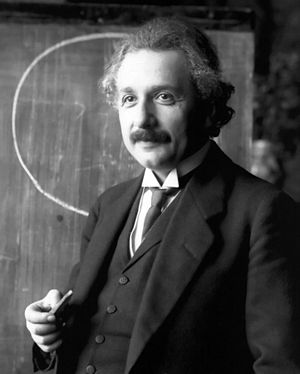 “I do not believe in a personal God and I have never denied this but have expressed it clearly. If something is in me which can be called religious then it is the unbounded admiration for the structure of the world so far as our science can reveal it.

“I believe in Spinoza’s God who reveals himself in the orderly harmony of what exists, not in a God who concerns himself with the fates and actions of human beings.”” (Albert Einstein, 1954)

“A human being is part of the whole called by us universe, a part limited in time and space. We experience ourselves, our thoughts and feelings as something separate from the rest. A kind of optical delusion of consciousness. This delusion is a kind of prison for us, restricting us to our personal desires and to affection for a few persons nearest to us.

“Our task must be to free ourselves from the prison by widening our circle of compassion to embrace all living creatures and the whole of nature in its beauty. The true value of a human being is determined by the measure and the sense in which they have obtained liberation from the self. We shall require a substantially new manner of thinking if humanity is to survive. (Albert Einstein, 1954)

So clearly, Einstein reasoned the best he could attain was freedom from the “optical delusion of consciousness” by embracing nature, not God, whole-heartedly.

And that philosophy, along with his compliance with work assignments for the OSS (forerunner to the CIA), and American armed services (largely controlled by global energy industrialists, particularly the Rockefeller family) made him so popular. This was an era in which the Carnegie and Rockefeller Foundations were heavily investing to advance science, and faith in it, as the new god. Einstein was on board.

Alternatively, Tesla, whose brilliant works were stolen by the energy and military industrialist of that age, including Thomas Edison, was persecuted and impoverished, though never once gave up faith in the Source of universal power to whom he routinely prayed. 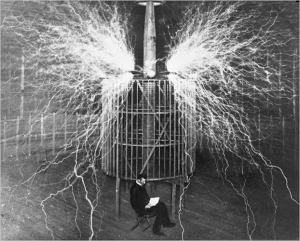 Tesla understood better than any contemporary scientist how the creative process works, and he routinely put this knowledge to the test. He wrote about his experience of invention, and creative self-expression, thusly:

“My method is different [from his contemporaries like Edison and Einstein). I do not rush into actual work. When I get a new idea, I start at once building it up in my imagination, and make improvements and operate the device in my mind. When I have gone so far as to embody everything in my invention, every possible improvement I can think of, and when I see no fault anywhere, I put into concrete form the final product of my brain.”

The Book of Genesis records a similar process YHWH (and the lessor gods) used to make you and I as a technological innovation of the imagination. Genesis 1:26-27 states:

“Then God said, “Let us make humankind in our image, in the likeness of ourselves; and let them rule . . . So God created humankind in his own image; in the image of God he created him: male and female he created them.”

There seems to me no other reasonable explanation for Moses, who reportedly wrote Genesis, to have repeated three times the word image in the creative process of constructing humanity than the first and second references to “image” refer to God’s “imagination,” while the third “image” referenced the Creator’s actual likeness, just as Genesis 1:26 states specifically, “in the likeness of ourselves.” 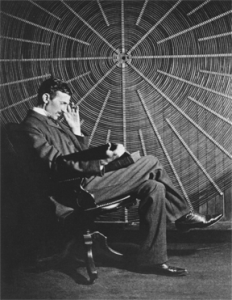 In other words, Tesla realized that he was endowed with the same creative technology that YHWH used to create—imagination—including the vision and inner experience intended, like a loving prayer, to bring something into physical existence metaphysically through the mind’s eye of creative self-expression.

Indeed, the creative imagination is central to the act of becoming, or manifesting advances whatever; which is consistent with the Name of the Creator, YHWH, which means “I AM/will be what IAM/will be,” as Moses was instructed personally. So the Creator is eternally in the act of becoming, as any human or divine creator might enjoy, human or divine, by constructively advancing imaginatively. And using the imagination linked to intuition, these creative technologies help creator’s to become more and more differentiated within the unified and unifying field of consciousness that Einstein attributed to nature.

“Will be,” an act of will to be, does not ask Shakespeare’s  question “. . . or not to be?” Being is a function of willingness to be imaginative consciously as a creator. When the human will is aligned with Source’s Will (i.e., Divine Will), then all the energy in the universe enables the vision for miraculous creative manifestation. This is a new theory on creationism that must still be tested, but is intuitively and empirically obvious.

So creation is mainly an act of choosing joyfully to love your whole being during self expression and creative differentiation. This act of will features being in the Now One with Source thanks to the unified field of consciousness. The universal stream of consciousness enables such metaphysical travel to other dimensions of awareness and parallel universes formed hydro-sonically, definitively engaging the musical- mathematical matrix that gives rise to space/time for the sake of creative differentiation, a process and pastime that is is eternal.

So Tesla tuned into the flow of Divine consciousness by faith, thereby tuning his creative will to his Source’s. Miraculously then, the channel opened for more and more creative differentiation and production of awesome innovations.  From radios and electrical power generators to wireless lighting systems and lasers, Tesla’s genius was virtually Divine.

Like the universal Creator, geniuses commonly use constructive imagination as creative technology to become more and more of themselves. This is an existential experience that inspired Tesla to write:

“I do not think there is any thrill that can go through the human heart [center of LOVE] like that felt by the inventor as he sees some creation of the brain unfolding to success. . . Such emotions make a man forget food, sleep, friends, {romantic] love, everything.”

Creation is differentiation within the unified and unifying field of consciousness that Einstein attributed to nature. Creative masters, like Leonardo da Vinci, and Tesla, engaged the Mother-load of the Source CODE to simply enjoy their creative genius. (Read: LOVE, the Real Da Vinci CODE.)

This is also why Tesla and da Vinci gave prayer so much weight in their work, and Einstein, who said he did not believe “in a God who concerns himself with the fates and actions of human beings,” missed out.

People only perceive what they choose to believe. Ironically, Einstein who criticized humanity’s “delusion of consciousness,” never transcended it himself to become one with the Maker of the flow of nature.

In conclusion, Tesla prayed before, during, and after creating. Before turning on his inventions, he prayed that they would work as per his image of them working that he replayed over and over again from every angle. Why? Because he realized that you and I are our Creator’s prayers, likewise manifested.

From the inner image we hold of ourselves and our world, to what we and civilization become, is simply the result of prayer inspired by heart-felt loving intent; that is, a choice and function of will to fulfill your destiny.