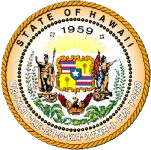 Award-winning filmmaker, public minister,  and internationally known consumer health activist, Dr. Leonard Horowitz, and investigative journalist Sherri Kane, dubbed “The HOROKANE” by government and drug industry detractors, have filed for injunctive relief to protect their civil rights, spa property, and the public from racketeers who have attempted to steal their Big Island estate under “color of law” administered by a publicly censured attorney, Paul J. Sulla, Jr. engaged in drug trafficking, according to the complaint. 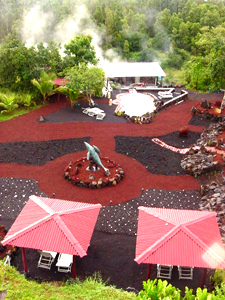 The “Kingdom of Heaven” property, sold to Horowitz by a predicate felon and convicted marijuana trafficker in 2004, was illegally foreclosed upon by Sulla, Jr. in contempt of court using fraudulently warranted mortgage and promissory note assignments, according to evidence in the complaint. The reported crimes were neglected for four years by law enforcers who effectively provided the attorney immunity from prosecution.

Sulla, Jr. is a leading “marijuana rights activist” who operates an “Ayahuasca Church” known to local lawyers, judges, and law enforcers, according to exhibits and multiple affidavits collected by The HOROKANE. The evidence includes  proof of Sulla, Jr.’s illegal manufacture and distribution of the controlled hallucinogenic narcotic dimethyltryptamine (“DMT”). 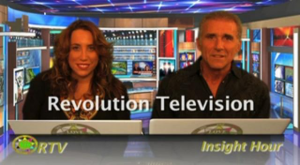 State and County officials, including law enforcers in the Attorney General David Louie’s office, and others in the Department of Commerce and Consumer Affairs, repeatedly neglected the journalists’ evidence and pleadings for protection of their oaths. State law enforcers neglected their oaths, and duties to enforce multiple laws, including those requiring the authorities to protect victims of organized crime, the complaint contends.

In essence, officials have “aided-and-abetted racketeering in organized crime by willful blindness,” Dr. Horowitz complains, claiming Sulla, Jr.’s enterprise has caused millions in damages to the plaintiffs and their ministry estate. 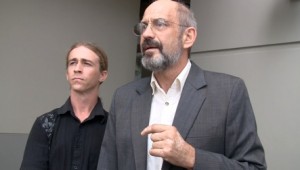 Attorney Sulla, Jr. was publicly censured in 2003, days before Horowitz was extorted to pay $150,000.00 more for the property than he contracted with Sulla’s client—a predicate felon, forger, and convicted marijuana trafficker—Cecil Loran Lee, according to the complaint. (Downloads of key filings are available from PaulSullaCensured.com).

At that time, the Supreme Court of Hawaii reprimanded the Rambo attorney for arguing like “a reckless man” in defense of convicted tax evader, Brian Takaba.

The journalists, shocked by reading of Sulla’s infamy, investigated further and found the attorney owned and operated a “drug church” with his son, Sulla, III, who the attorney unlawfully claimed to the court was working as a “clinical psychologist” in violation of State licensing laws.

Affidavits from people involved in the “church’s”  manufacture of the hallucinogenic narcotic “DMT” for the Sullas’ “religious ceremonies,” and online reports from churchgoers, evidence the SKY OF HAWAI’I enterprise  traffics large quantities of the hallucinogenic “sacrament” that, like LSD, is claimed to produce “spiritual experiences,” but endangers lives.

Stefan Kasien, a Scottsdale, AZ, real estate executive (photo right), wrote of his horrific experience at one SKY OF HAWAII “church” “ceremony” after dining with SULLA, III, and the famous hallucinogenic drug proponent, Dr. Stanley Krippner (left). Krippner became the CIA’s leading dream telepathy and ayahuasca expert, widely known for his  mind control—MKULTRA Program—involvement that became the subject of the 2009 Hollywood film, The Men Who Stare at Goats.

“Apparently I had lost consciousness,” Kasien wrote after following Krippner’s introduction to the Sullas and their “church.” Kasien reported falling “face forward on the concrete floor” after taking the drug.

“My titanium-rimmed glasses lacerated my forehead when I fell, and the braces on my upper teeth had punctured my lip,” Kasien detailed online.

Krippner’s and the Sullas’ guest was rushed to the hospital where he had to receive a dozen stitches on his forehead, and a half dozen on his lip. And that’s not all. . . .

“In 2006, I underwent an emergency procedure to remove a hemangioma from my brain,” Kasien concluded. “It was partially obstructing my right lateral ventricle and causing intolerable headaches. . . .  [I[t could have been the impact of my fall . . ., or something that got triggered during my subsequent rituals. Or perhaps the rituals prevented the condition from being far” worse, he left his readers wondering. 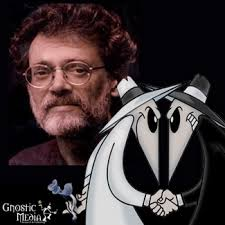 “Another Krippner colleague died of brain cancer,” recalled Sherri Kane, referring to admitted CIA/FBI drug-cult propagandist, Terrance McKenna, who, like the Sullas, manufactured DMT on the Big Island of Hawaii until his death in 2000 from a brain tumor.

The Sullas’ have followed McKenna’s lead in promoting ‘entheogens’—hallucinogenic drugs that elicit what Krippner and the Sullas call “spiritual content.”

“I don’t think it is a coincidence that Dr. Horowitz, a world leading pharmaceutical industry whistleblower and public minister, is under attack by Sulla, Jr., who, like McKenna, advances an ayahuasca enterprise promoted by Krippner to establish a “New World Religion,” Kane commented about the extraordinary links.

“We didn’t file our complaint to stand in judgment of the Sullas’ ‘religious’ beliefs,” Horowitz said. “We filed it for relief against damages caused by Sulla’s hypocrisy as a supposed “church” leader and “court officer” advancing a conspiracy to steal our property with implied consent of the State.”

Federal Agencies May Be Joined

According to government reports, these events are unfolding where organized crime makes an estimated $10 billion annually from the marijuana industry alone, and Sulla, Jr. is among Hawaii’s most outspoken marijuana rights activists and defense attorneys. 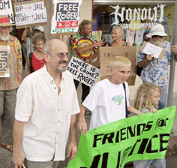 Dr. Horowitz, who believes Christie was “set up to go down,”  studied McKenna’s admitted “public relations” operation for the FBI/CIA, and Krippner’s research as a CIA contractor at Maimonides Medical Center. The evidence strongly suggests the Sullas’ interests are consistent with those of the drug cartel and the CIA’s MKULTRA Program.

Mind-control  for social-engineering was studied by the CIA for many years, according to Senate Reports published by the Frank Church Commission in 1975-76. The investigators  detailed the FBI’s and CIA’s use of the media for propaganda, and unwitting Americans for biological, radiological, and chemical warfare experiments, including LSD, THC, and DMT testing on uninformed citizens to alter beliefs, attitudes, and behaviors–in essence, to control society or “targeted populations.” (Read these Reports by clicking here.) 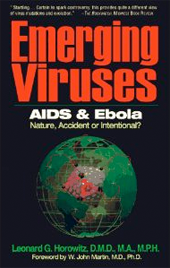 “BigPharma’s special interest in politics and health science is genocidal,” Dr. Horowitz has argued for nearly two decades, after discovering National Cancer Institute contracts for developing AIDS-like and Ebola-like viruses as early as 1974. According to his first of three bestsellers—Emerging Viruses: AIDS & Ebola—Nature, Accident or Intentional?—these viruses tainted vaccines made by the Merck Drug Co., infecting gay men in New York and African women during the Army’s early 1970s hepatitis B vaccine trials.

In 2006, Krippner presented his religious thesis—“The Future of Religion” —during a Swiss symposium promoting LSD as a “wonder drug” for troubled youth. The conference was dedicated to hallucinogenic drug pioneer, Dr. Albert Hoffman.

“A demon had invaded me,” Dr. Hofmann wrote of his first LSD “trip”. The drug took “possession of my body, mind and soul,” Hoffman reported, very concerned about LSD’s recreational uses and media portrayals glamorizing the risky neurotoxin.

“I was not surprised that it became a ritual drug in the youth anti-establishment movement,” Hofmann continued, knowing the “social experiment” had been orchestrated by the CIA wielding the media, according to scholars and U.S. Senate Reports. “[B]ut I was shocked by irresponsible use that resulted in mental catastrophes,” he told Playboy magazine shortly before his death in 2006.

“In my opinion,” Horowitz offered, “Kane and I have been targeted by Sulla, Jr.’s gang for the work we do alerting people to the dangers of poisonous drugs and vaccines—risks  generally concealed by an industry making inroads into the religious world as part of a larger conspiracy against human rights.”

People are unaware how and why civilization is being increasingly drugged, poisoned, and killed by psychopaths directing the petrochemical-pharmaceutical cartel, Horowitz argues, noting “these industrialists openly publish their ways and means to control and reduce populations most profitably, regardless of human or environmental risks and disasters.” 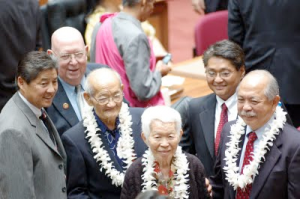 Horowitz’s problems began in 2005 when Sulla’s purported “client” forged a closing agreement drafted by the whistleblower’s first attorney, now sitting judge in the Third Circuit Court, Glenn S. Hara. (Far right in photo taken for a Hara family tribute during the “50th Anniversary of  Statehood Commemoration” at the University of Hawaii in 2008.)

“The Hara File” proved that Sulla’s client altered the contract, but the entire file, along with expert witness, Judge Hara, was purposely neglected by Sulla, Jr., and concealed by Horowitz’s second and third attorneys—gubernatorial candidate John S. Carroll, and Honolulu foreclosure expert, Gary Dubin. Subsequently, the attorneys, two Third Circuit Court justices, and law enforcers all concealed or neglected irrefutable evidence of multiple felonies committed by Sulla and his clients, resulting in the plaintiffs’ mounting damages.

Among the outrageous proceedings, Horowitz needed to appeal Judge Ronald Ibarra’s decision to vacate Horowitz’s $200,000.00 jury award that Sulla, Jr. contested. When the the court transferred the record on appeal, however, the Hara File showed more tampering! The lower court altered and concealed Judge Hara’s handwritten notes on the chain of records proving the forgery was done by Sulla’s client. The tampering occurred in two different parts of the 6,300 page record, while all other pages transferred perfectly. The conspirators’ intent was to frame buyer Horowitz for seller Lee’s forgery.

Sulla, Jr. and State officials have filed  to dismiss the brewing scandal in federal court, that would require the journalists to refile in the circuit wherein two judges have been willfully blind to the witness and evidence tampering “in contempt of court by the court,” according to the plaintiffs’ pleadings. This is a main reason Horowitz seeks federal protections against the State under his civil rights and public minister status.

The journalists are also circulating a petition to persuade the Supreme Court of Hawaii to disbar Sulla, Jr., and for law enforcers to arrest him. Their Federal complaint prays for triple damages, or $18 million—money they say will help spread the “528LOVERevolution” advancing “medicinal music” for natural healing and world peace.